ALGONA—Algona pounded out a total of 12 hits in a wild 17-8 North Central Conference softball victory on Wednesday, June 8 over the Hampton-Dumont Bulldogs.

The home team scored twice in the bottom of the first but Hampton-Dumont answered with six in the top of the second inning. Algona erupted for 10 runs in the bottom of second stanza to take a 12-6 advantage.

SPIRIT LAKE—North Union split a pair of softball contests on Saturday, June 11 at the Spirit Lake tournament. The green-black-and-silver needed extra innings to defeat Marcus-Meriden-Cleghorn/Remsen Union 8-3 in eight innings and was blanked by Spirit Lake 2-0.

ALGONA—Bishop Garrigan began the second time through their Top of Iowa Conference softball schedule with an 8-3 league home victory over Belmond-Klemme on Monday, June 13.

The black-and-gold trailed 3-0 after two-and-half innings before scoring two runs in each of the next four stanzas to earn the win. Abbie Capesius continued her torrid hitting with three more hits, including a pair of doubles.

ALGONA—Algona earned a hard-fought North Central Conference softball victory on Monday, June 13 over the Clear Lake Lions by the final score of 7-6.

Sports 15 June 2022
No. 2 Estherville Midgets too much for Algona

ESTHERVILLE—Estherville-Lincoln Central showed why they are the second-ranked baseball team in Class 2A with a 13-2, five-inning victory on Thursday, June 9 over the Algona Bulldogs to improve to 15-2 overall on the year.

The home team exploded for 12 runs in the bottom of the first inning before tacking on another tally in the third stanza while the red-and-black only two runs came in the top of third frame.

The purple-and-gold played much better this time around than in the season opener between the two squads as the Rebels pounded the Wolverines 23-0 in three innings on May 24 at Peterson.

GARNER—North Union scored three runs in the top of the seventh inning with two outs to earned their third consecutive Top of Iowa Conference baseball victory on Friday, June 10 with a 5-4 win over league leader Garner-Hayfield/Ventura.

HUMBOLDT—Humboldt won their ninth straight game on Friday, June 10 as the blue-and-gold defeated the Algona Bulldogs 9-3 in a North Central Conference baseball contest.

The Wildcats scored in every inning but one in the win as they plated single runs in the first and third frames, tallied three times in the second and twice in both the fifth and sixth stanzas.

The Cougars plated three runs in both the first and third innings, added a single run in the second stanza and ended the contest early with five tallies in top of the fifth as the home team scored their lone run in the bottom of the fifth frame.

There were 3,100 shooters attending this event from grade school through high school. The local teams participated in the American Single Shot division, which consists of shooting two flights of 100 targets at 16 yards.

DES MOINES—Bishop Garrigan traveled south to Principal Park on Tuesday, June 7 to take on the Clarion-Goldfield/Dows Cowboys and came back home with a 12-1 victory in five innings.

Hollis Bode pitched 4.1 strong innings to earn the win on the hill. He allowed one earned run on four hits with four strikeouts, walked one and hit a batter. Drew Lappe came in to get the final two outs and struck out one hitter.

The Titans plated four runs in first inning along with three tallies in each of the second, third and fifth frames while the purple-and-gold scored twice in the third stanza, three in fourth, four in the fifth and one in seventh inning but fell three runs short of their victory of the season. 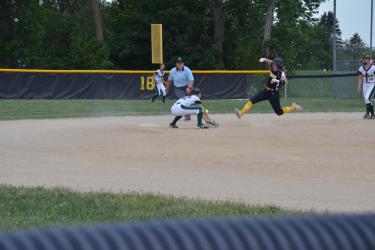 SWEA CITY--Emily Meyer flipped a no-hitter to help lead the North Union Warriors softball squad to a 5-0 Top of Iowa Conference victory in a contest played on Friday, June 3 over the Bishop Garrigan Golden Bears.

The Warrior right-hander struck out 15 batters and issued a pair of base-on-balls in seven innings in the circle. Darius Goche took the loss, despite a solid pitching performance. 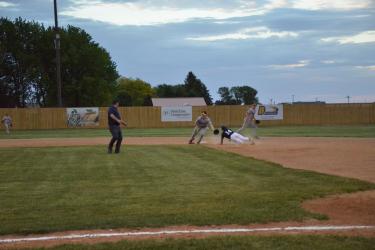 BANCROFT—Bishop Garrigan took advantage of 17 base-on-balls by the North Union pitching staff in a 13-2 Top of Iowa Conference baseball victory over the green-black-and-silver on Friday, June 3.

The black-and-gold did have eight hits in the contest and were also hit-by-a-pitch twice but stranded 14 runners on the base paths. The home team had five hits as they left 11 runners on base with each squad committing three errors in the game. 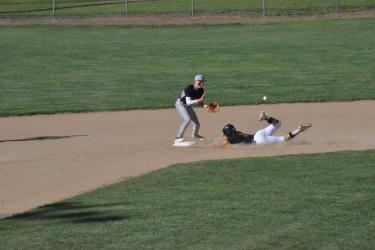 NEWELL—Newell-Fonda scored in every inning in an 11-1, five-inning Twin Lakes Conference baseball victory on Friday, June 3 over the West Bend-Mallard Wolverines.

The Mustangs led 4-1 going into the bottom of the fifth inning before exploding for seven runs in the frame to end the conference contest early for the 11-1 win. 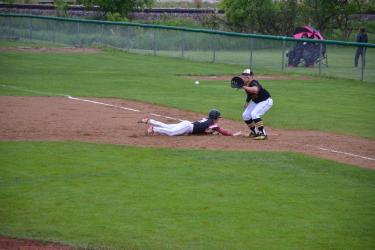