MANSON—A five-run third inning proved to be the difference on Thursday, June 2 as the North Union Warriors baseball team dropped a 9-7 non-conference contest to the Manson Northwest Webster Cougars.

The Cougars scored single runs in both the second and fourth stanzas, plated two runs in the sixth frame and the five tallies in the third while North Union scored twice in both the first seventh innings and added three more in the fourth.

SPENCER—Spencer scored every inning in a 13-2, five-inning non-conference baseball victory on Thursday, June 2 over the Bishop Garrigan Golden Bears.

ALGONA—Tate Slagle and Carlos Gomez combined for a seven inning no-hitter as the Algona Bulldogs baseball team earned a tight 2-1 non-conference win on Thursday, June 2 over the Eagle Grove Eagles.

Slagle tossed the first 4.2 frames for the red-and-black. He gave up one unearned run on no hits while striking out eight and issued five base-on-balls. Gomez earned the win in relief, hurling the final 2.1 stanzas.

The black-and-gold scored single runs in the first, second and fourth frames along with three tallies in the third and ended the contest early with six runs in the bottom of the sixth stanza. The Lady Bison scored their only two runs in the top of the fifth inning.

NEWELL—The North Union Warriors softball squad was handed their first loss of the 2022 season on Saturday, June 4 in the final game of the Newell-Fonda Classic.

The Warriors (ranked No. 3 in Class 2A) fell to Newell-Fonda (No. 4 in Class 1A) by the final score of 3-1. The Mustangs scored single runs in the fourth, fifth and sixth frames while the green-black-and-silver scored their only tally of the contest in the bottom of the seventh stanza.

In the opener, the Gaels scored twice in the first and third frames, added four more in the fourth and three in the sixth stanza while the Golden Bears scored single runs in the second, third and sixth innings and two runs in the fifth.

The green-black-and-silver plated single runs in the first and fourth innings along with three runs in the bottom of the second stanza and ended the contest early with five tallies in the fifth frame.

BELMOND—North Union remained unbeaten on the year with a 10-0, five-inning Top of Iowa Conference softball victory over Belmond-Klemme on Wednesday, June 1.

The green-black-and-silver scored in every frame in the win with single runs in both the first and third stanzas, plated four runs in the fourth along with two runs in both the second and fifth innings.

SPENCER—Spencer scored six times in the bottom of the first inning and claimed a 10-0, five-inning non-conference softball victory on Thursday, June 2 over the Bishop Garrigan Golden Bears.

The Tigers had just six hits in the win but took advantage of eight walks and four black-and-gold errors in the contest. Abbie Capesius and Emmi Bartolo led the Golden Bears at the plate with two singles each while teammate Darius Goche added a single in the loss.

The black-and-gold pounded out 13 hits in the win compared to just four by the home team but the Eagles took advantage of 10 walks and three hit batters to stay close. Eagle Grove scored three runs in the bottom of the first before the Golden Bears plated two in the second.

ALGONA—Algona let an 11-4 lead get away but scored a run in the bottom of the seventh inning for a wild 13-12 non-conference softball victory on Thursday, June 2 over the Southeast Valley Jaguars. 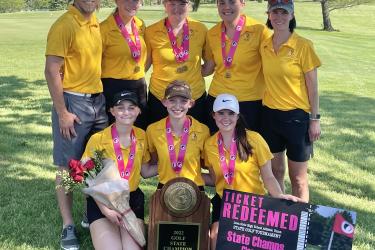 MARSHALLTOWN—For the third consecutive year, the Bishop Garrigan Golden Bear girls’ golf squad is the Class 1A state champions. The black-and-gold also won the title in 2019 and 2021 and there was no state tournament in 2020 due to COVID. 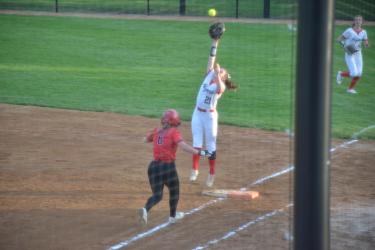 ALGONA—Despite being out-hit six to five; the Algona Bulldogs softball squad took advantage of walks and hit batters in a 12-2 North Central Conference victory on Friday, May 27 over the Clarion-Goldfield/Dows Cowgirls. 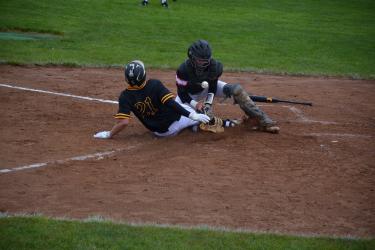 ALGONA—Algona pounded out 12 hits to help lead them to a 14-4, five-inning non-conference victory on Wednesday, May 25 over the Emmetsburg E-Hawks for the their first win of the season.

The red-and-black ended a 5-4 contest by erupting for nine runs in the bottom of the fifth inning. Carlos Gomez led the way with three singles as Stren Crouch had two singles and Tate Slagle added a single and a double.