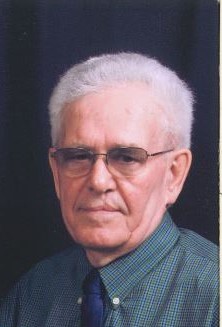 Ervin Eimers, age 94 of Burt, passed away on Thursday, Nov. 3, 2022, at the Kossuth Regional Health Center in Algona. Funeral services were 11 a.m. on Wednesday, Nov 9, at St. John’s Lutheran Church in Burt. Burial took place at East Lawn Cemetery in Algona, with military rites conducted by the Iowa Army National Guard Honor Guard. Visitation was 4 to 6 p.m., Tuesday at the church. Services were livestreamed on St. John’s You Tube Page.

Ervin aka “Short” was born at home with his twin brother Everett in Halfa in 1928 to Adella (Meyer) and Emil Eimers. He attended country school in Ringsted and Seneca, then moved to Burt in 1939 and attended country school there. Short was confirmed at St. John’s Lutheran Church in Burt and remembers his confirmation song as “Just As I Am.” Short graduated from Burt High School in 1945. He drove truck for five years after graduating and then entered the Army. He attained the rank of Sargent while serving in the Korean War and was awarded three Bronze Stars. While waiting to be honorably discharged he met the love of his life, Patsy Herbon in Chicago. In 1953 they were united in marriage at St. John’s Lutheran church in Burt. They had six children, Howard of Mpls. Minn., Kathy McGuire (Dennis) of Waukee, Stan of Algona, Karen Karles (Lyle) of Burt, Russell (Lori) of High Amanda and Michael (Mary Beth) of Canton, Mich. They are blessed with 17 grandchildren and 29 great-grandchildren. Short was a farmer after serving in the war and then started Eimers Trucking with his sons which continued for the rest of his working life.

Short enjoyed fishing, gardening and woodworking. The year 2022 was the first year he didn’t plant a garden of which he shared his bounty with everyone. St. John’s Lutheran Church of Burt was an important part of Short’s life. Spending time with his grandkids brought smiles to his face.

Ervin is preceded in death by his parents, parents-in-law Harold and Lois Herbon, his brothers Raymond, Jerry, Everett, Donald and his twin sister Darlene Schmidt, son-in-law Dennis McGuire and Joni Petersen. He is survived by his wife, children  and grandchildren.

The Lentz Funeral Home of Burt is serving the family, exclusive provider of Veterans and Family Memorial Care. Condolences may be left at www.lentzfuneralhome.com